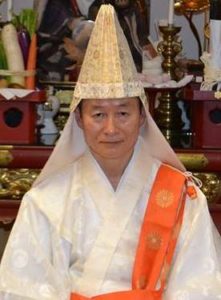 Tsukamoto Kanto Shonin From Saga Prefecture, Japan, Tsukamoto Shonin is the Head Priest of the Nichiren Shu Buddhist Temple of UK and the founder of the Enkyoji Buddhist Network. Having spent the first part of his life as a professional mountain climber summiting major peaks in the Himalayas and elsewhere, Tsukamoto Shonin later made the decision to become a Nichiren Shu Priest, working for Nichiren Shu Head Office (Shumuin) in Ikegami before going to the Los Angeles Minobusan Beikoku Betsuin in 1995 to train as a Kaikyoshi (Overseas Missionary Priest). Following his stay in Los Angeles, he moved to Canada in March 1996, becoming the 8th Head Priest of the Toronto Nichiren Buddhist Church, and in 2007 he transferred to the UK to become the 6th Head Priest of the Nichiren Shu Buddhist Temple of UK. A remarkable Buddhist teacher, he is known for his keen insight, his emphasis on a practical approach to the Dharma and his ability to share profound teachings in a direct way through the use of simple, easy-to-grasp explanations. 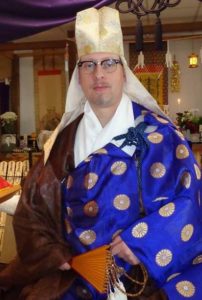 Kanjin Cederman Shonin was born in Wheatfield, NY. When he was 18, he became a Buddhist monk in the Chinese Tien Tai tradition. At the age of 23 he moved to Toronto where he met Tsukamoto Shonin, head minister of the Toronto Nichiren Shu temple. Tsukamoto Shonin gave Cederman Shonin a copy of the Lotus Sutra. Then Shami Cederman became convinced that the Lotus Sutra was the highest teaching of the Buddha. One week before he was scheduled to move to Taiwan for the rest of his life, Shami Cederman left the Tien Tai temple and began to study with Kanto Tsukamoto Shonin. Kanjin Shonin studied with Rev Tsukamoto for 13 years. In 2007 Rev Cederman attended Shingyo Dojo at Mount Minobu in Japan where he completed his studies and became a Nichiren Shu priest. In June 2010 he attended reidan training in Tokyo, and in November 2010 he attended Aragyo at Onjuin in Chiba, Japan. Kanjin Shonin is Abbot and head priest of 長栄山円教寺 Choeizan Enkyoji Temple of Seattle and 祥栄山円教寺 Shoeizan Enkyoji Buddhist Temple of Rochester and the 円教寺 Enkyoji Network of Nichiren Shu Buddhist Temples and Sangha World Wide.