Welcoming a baby into our lives is a special event. Children grow up so fast; before you know it they are adults. At 円教寺 Enkyoji Buddhist Network, we honor babies’ lives with traditional Japanese rituals incorporated into Buddhism. Our Ministers will be happy to explain any of the traditions you are interested in participating in. If you are in need of any of the items, please feel free to contact one of our Temples. 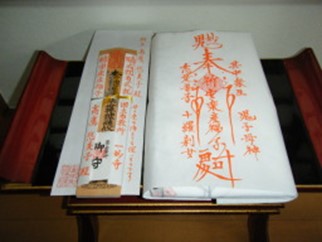 During the 5th month of pregnancy, a pregnant woman will receive an anzan hara obi (sash) from her parents or the temple, specifically to pray for safe and easy childbirth. In the fifth month of pregnancy on the day of Inu-no-hi (戌の日 - Day of the Dog), she will bind her belly with the cotton sash to ensure safe and easy delivery of her child. An anzan omamori (安産御守 - amulet) is given to the mother at the same time to provide protection during pregnancy and childbirth. 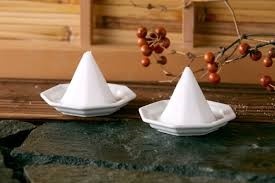 On the 3rd day after birth the parents purify the baby’s room to welcome the baby into this new space by placing mounds of salt in the two kimon (鬼門 demon gates). The kimon is found in the northeast and the ura kimon (裏鬼門 behind demon gate) is found in the southeast. Traditionally it is thought that evil comes from the northeast. A special ofuda (paper charm) is given to the parents to hang over the child’s crib. 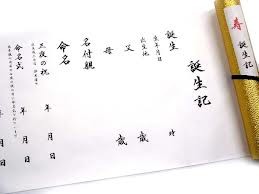 The tanjoki (誕生記 birth scroll) is a scroll prepared by the head priest of the temple that records all the major events in the child’s life. The is comparable to a baby book in the west. This is usually given to the parents at the time of the child’s first visit to the temple.

Many Buddhist people in China and Japan never name a baby before birth. They give the baby a fake or so called “milk” name. It should be something bad or disgusting like for example “mud face”. It is done to make the evil spirits “sick” and get them away from the baby. Such names can become nicknames during the childhood. In picking the name the priest of your temple is able to assist you in picking an auspicious name, either a kanji (Chinese character) based name or to assign kanji to an English name.

One week after the child is born, the new parents and their close relatives will hold the oshichiya, the baby naming ceremony. The oshichiya is held on the seventh night, known as the oshichiya meimeishiki (お七夜命名式), and it is when the child receives his/her name officially in front of the butsudan (home buddhist atar). The traditional meal for the attendees during this ceremony consists of vegetables, red rice and beans, and sea bream fish. 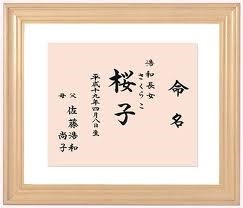 Once the baby’s name is decided, the parents will have it handwritten in Japanese calligraphy on the meimeisho (命名書 name certificate) by the priest of the temple. The meimeisho can be in the form of a scroll, poster, or fancy cardboard, and it will be displayed prominently in the house, usually on the wall by the butsudan. Relatives and friends will gather around the newborn who is dressed in white and present their gifts or shugibukuro (祝儀袋 monetary gifts in a special envelope). Then the celebratory dinner is served. Two auspicious dishes are traditionally on the menu: sekihan (赤飯 red rice) and tai (鯛 sea bream).

The next ceremony is hatsumairi (初参り first Buddhist service), where the family takes the baby to the family Buddhist temple on the 31st (for boys) or 32nd (for girls) day after birth to report the birth to the Buddha and ancestors, thanking them for a safe birth and asking them to guide the child as he/she grows up. Omiyamairi is similar to a christening ceremony found in the Christian tradition. As the parents hold the baby the priest will bless the child’s head with amacha (sweet tea) from the Hanamatsuri (Buddha’s Birthday) ceremony. The parents request special charms and write a special prayer on an ema (wooden prayer plaque). 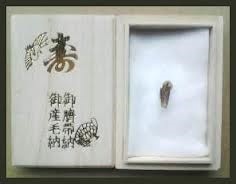 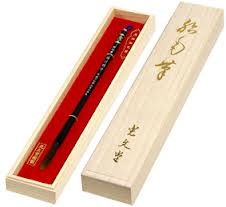 The Aka-Chan Fude (赤ちゃん筆 baby’s brush) is a writing brush made from the locks of the baby’s hair. This ancient tradition goes back for hundreds of years whereby creating this brush invokes the good fortune and blessings of happiness, health, intelligence and a prayer of everlasting and unchanging love upon the child. Essentially this brush is made from baby’s first hair cut – one that has never been touched by scissors before. The temple can help you to purchase this item.

When baby is 100 days old, the okuizome (お食い初め first meal) is prepared and served to the baby. (Some regions have theirs on the 120th day). By performing this ritual, the parents hope that their child will always have good food in abundance and will never go hungry for the rest of his or her life. The menu can differ according to your heritage. The foods most commonly served in Japan are:

The ceremony should be done at home. The baby should be dressed up in a tiny kimono or other traditional clothing from your family heritage A little table is set up for the baby. Of course, this is only symbolic. Parents will pick up small bits of the food with chopsticks or a spoon and press it against the baby’s lips. The food can be shared or eaten by the parents during the get-together which usually followers this happy occasion. 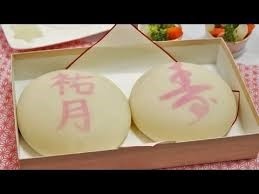 On his/her first birthday (初誕生 hatsu tanjo) the child is given a pair of red-white rice cakes ( 誕生餅 tanjo mochi). This is called issho mochi (一升餅). 一升 is a homonym with 一生 (lifetime), so sometimes it is written as “一生餅” instead. The child will carry the mochi with kotobuki (寿 celebration, longevity) and the child’s name written on it in red on his/her back or shoulder, either in a bag or bundled up with a furoshiki (風呂敷 wrapping cloth).

一升 (issho) is an old unit of Japanese liquid measurement equivalent to 1800cc, so the mochi weighs around 1.8kg. During this ceremony the parents’ role is to PREVENT the child from walking smoothly by deliberately making him/her stumble with a light push.

By carrying out this ritual, well-intentioned parents wish for the child to be blessed with health, food and enman (円満) throughout his or her life. 円満 represents perfection, harmony, peace, smoothness, completeness, and satisfaction as well as integrity . 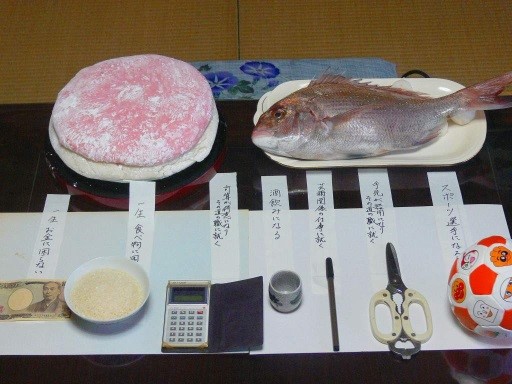 Another part of the first birthday tradition is known as erabitori (選び取り pick & keep an item). The baby is given a selection of items and is watched to see which is the first thing picked up as it is believed that this will show his/her potential calling, a tendency towards a specific career field.

Below are the basic items usually used and their meaning. However, you can use any items that you find relevant to your family. 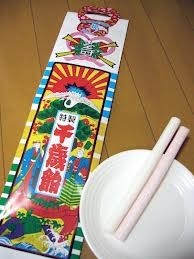 Shichi-Go-San (七五三 lit. Seven-Five-Three) is a traditional rite of passage for three- and seven-year-old girls and three- and five-year-old boys held annually around November 15. On that day children visit temples or shrines, often in traditional Japanese clothing. The children are given chitose ame (千歳飴 1,000 year candy). Chitose ame is a long, thin, red and white candy, which symbolizes healthy growth and longevity. It is given in a bag decorated with a crane and a turtle, which represent long life in Japan.